After their massive Scientology protests I found myself fascinated with Anonymous. A college project intended to “center around a subculture” proved the perfect place to explore this interest. My style guide restricts colors and typography to the 6 basic RGB colors and system fonts respectively, reflecting the democratized and internet-based nature of Anonymous’ hacktivism. I also created a mark for the campaign, though it’s intentionally almost unrecognizable as a “brand.” 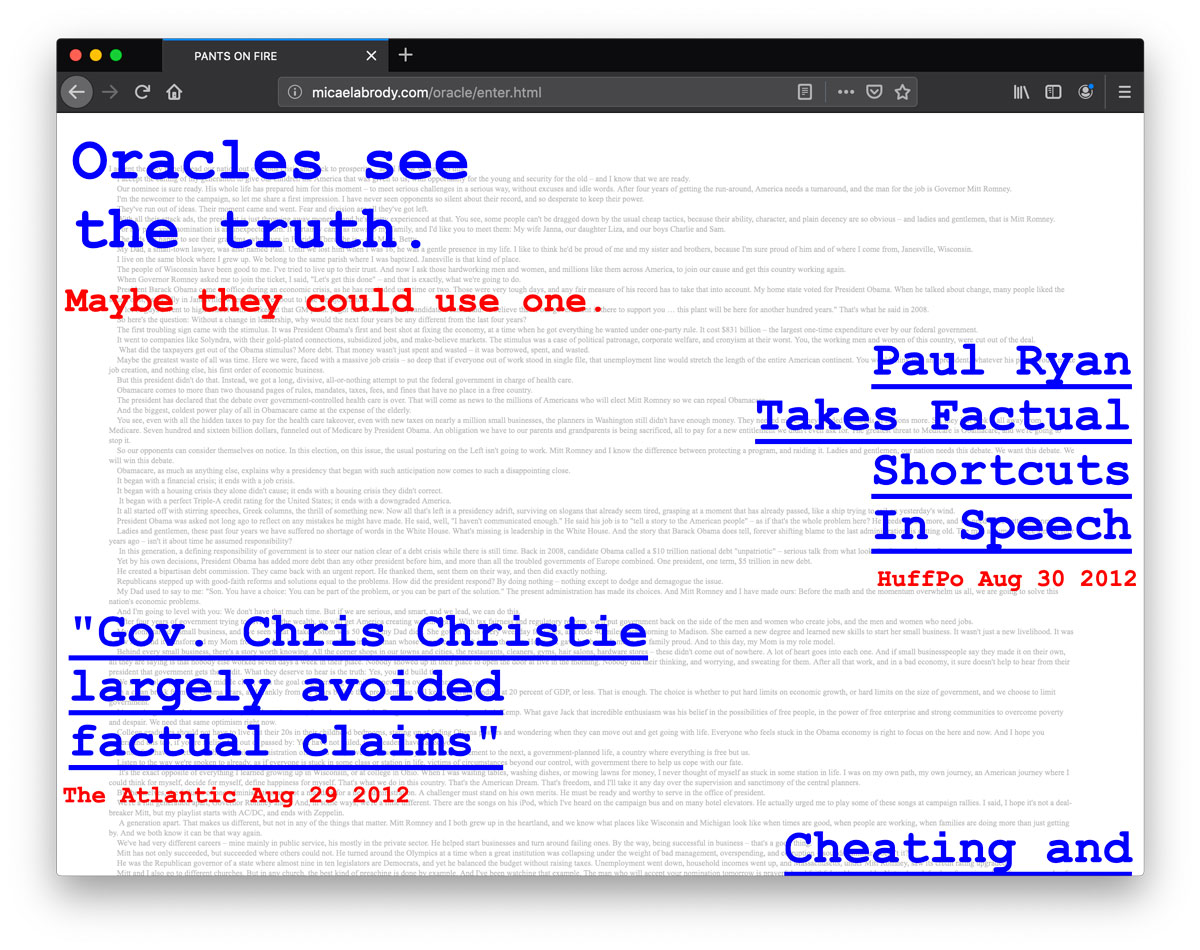 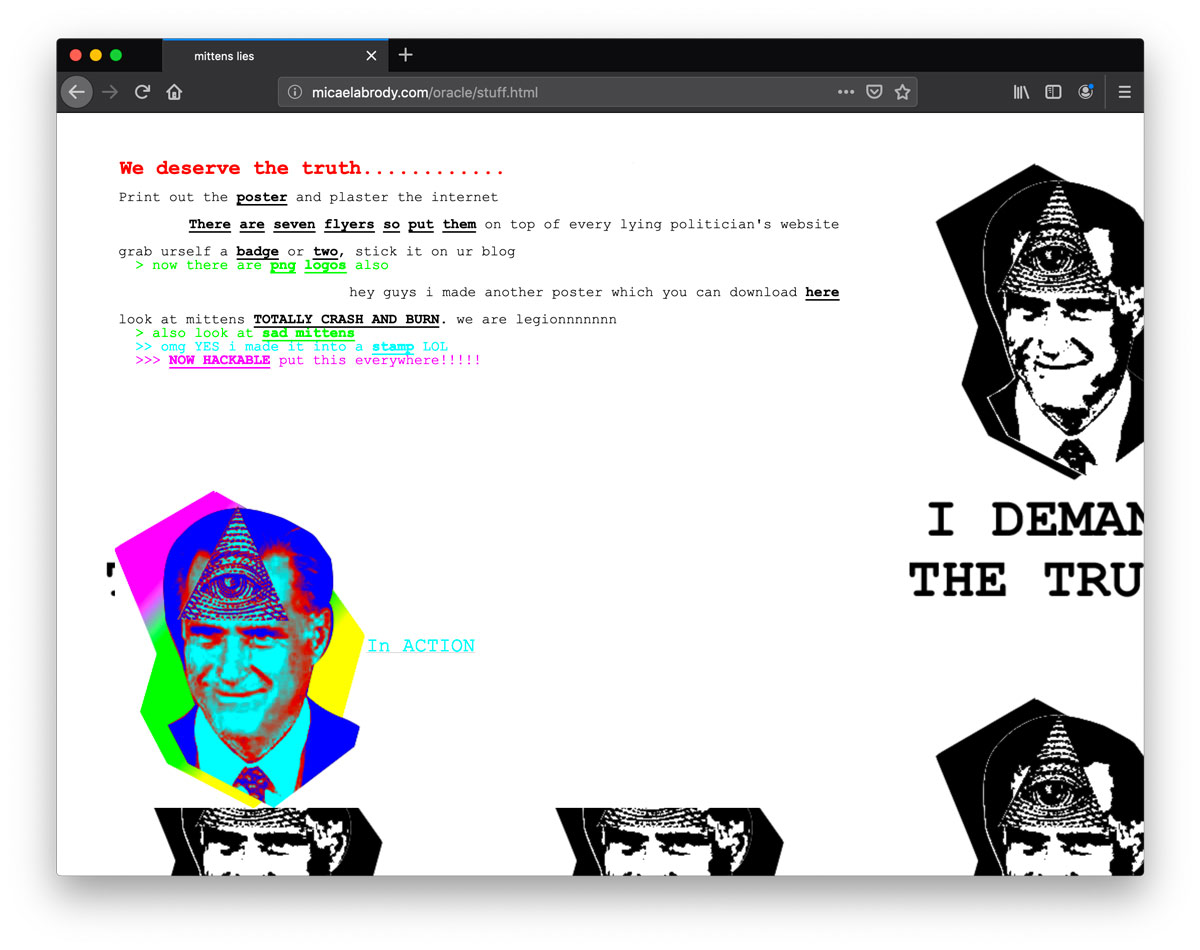 My project took on a narrative, wherein Anonymous campaigned against Mitt Romney during the 2012 presidential election. The first piece was a website housing Operation Oracle - a campaign for truth in one of the first major fact-check focused election cycles - featuring downloadable social media assets and a tongue-in-cheek video. An aggressive and hostile graphic style follows Anonymous’ frequently confrontational tone.

While I cannot hack a website, within my fictional campaign, these graphics could be placed on campaign websites by some clever internet rascals. 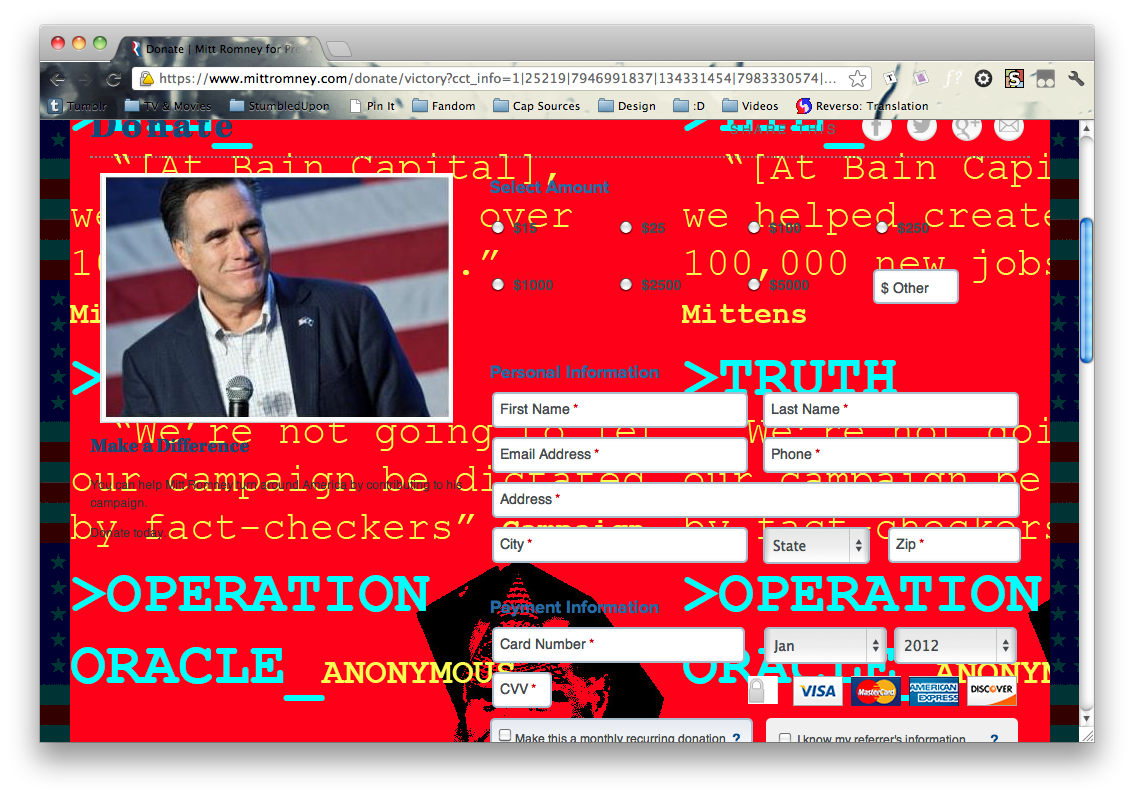 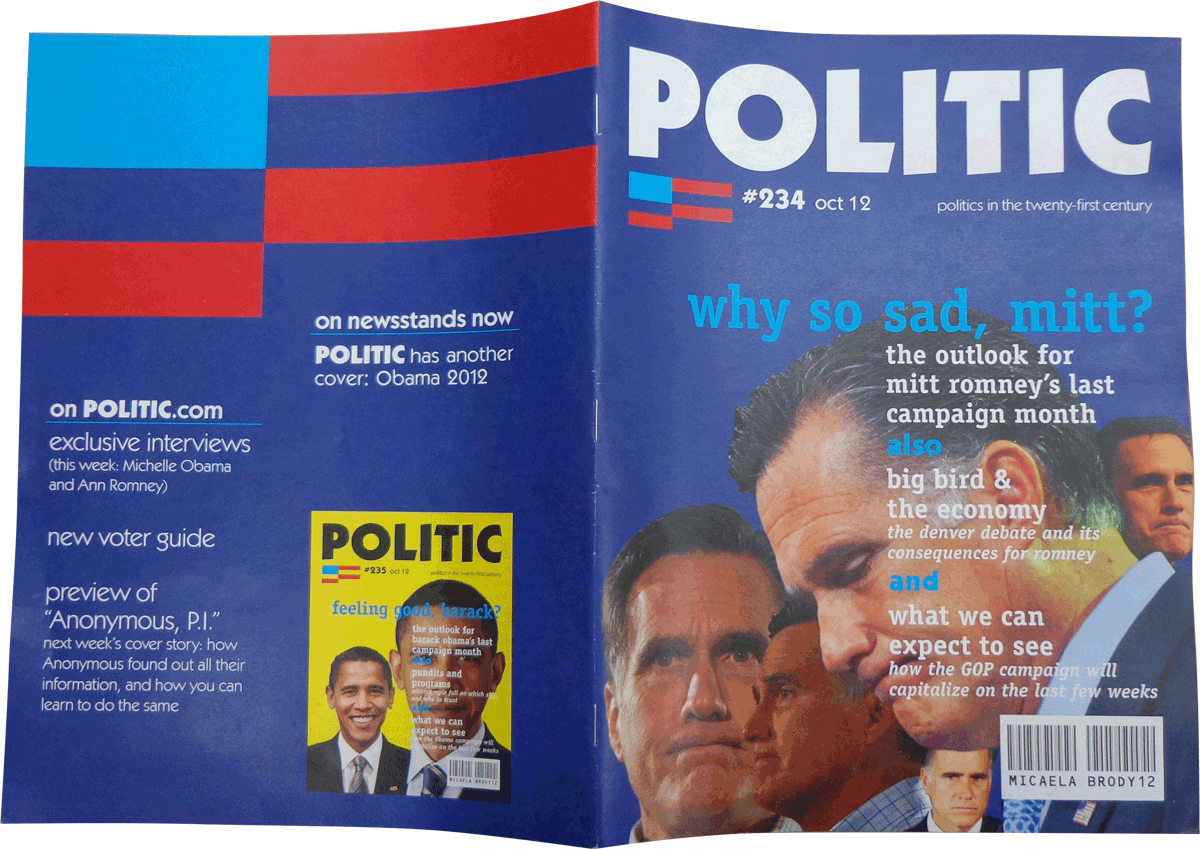 The second chapter of Operation Oracle was to enter the real world. Stickers provided a foundation for IRL participation. In the fictional timeline of the movement, offline fascination with Anonymous grows (as it did in the Scientology protests), so I vandalized a magazine which I also designed, indulging a passion for editorial design while exploring how the tone of Anonymous and Oracle would contrast with more standard political reporting.

After presenting this project for critique and handing out stickers to other students, I saw that in fiction becoming reality, they started to crop up around both the College of Fine Arts building and BU’s campus more broadly.

The "real world's" real-life fascination with Anonymous, both in real life and my fiction, are felt long after their heyday passes. The aftershocks of the real campaigns Oracle was inspired by, such as Occupy Wall Street and of course, the anti-Scientology campaign, were influential for years. 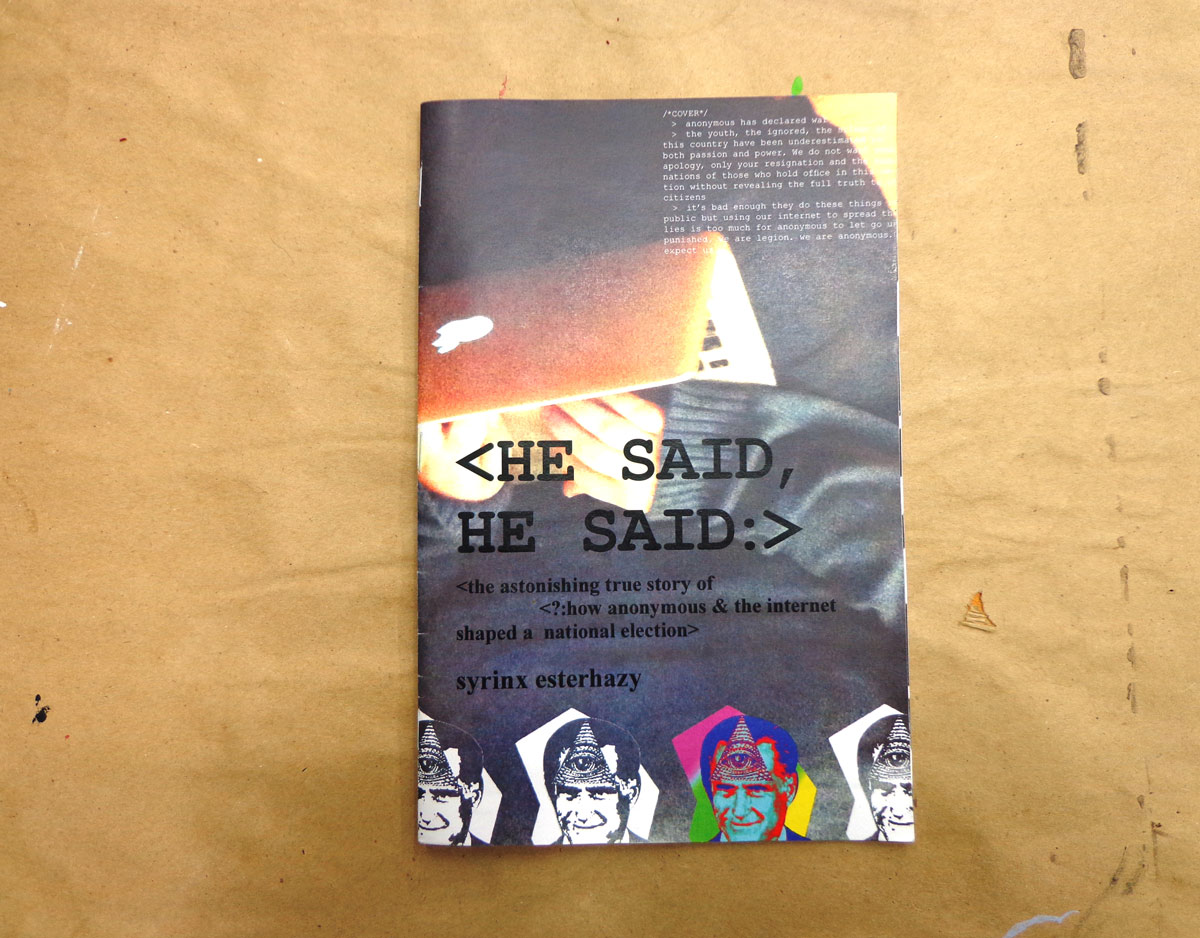 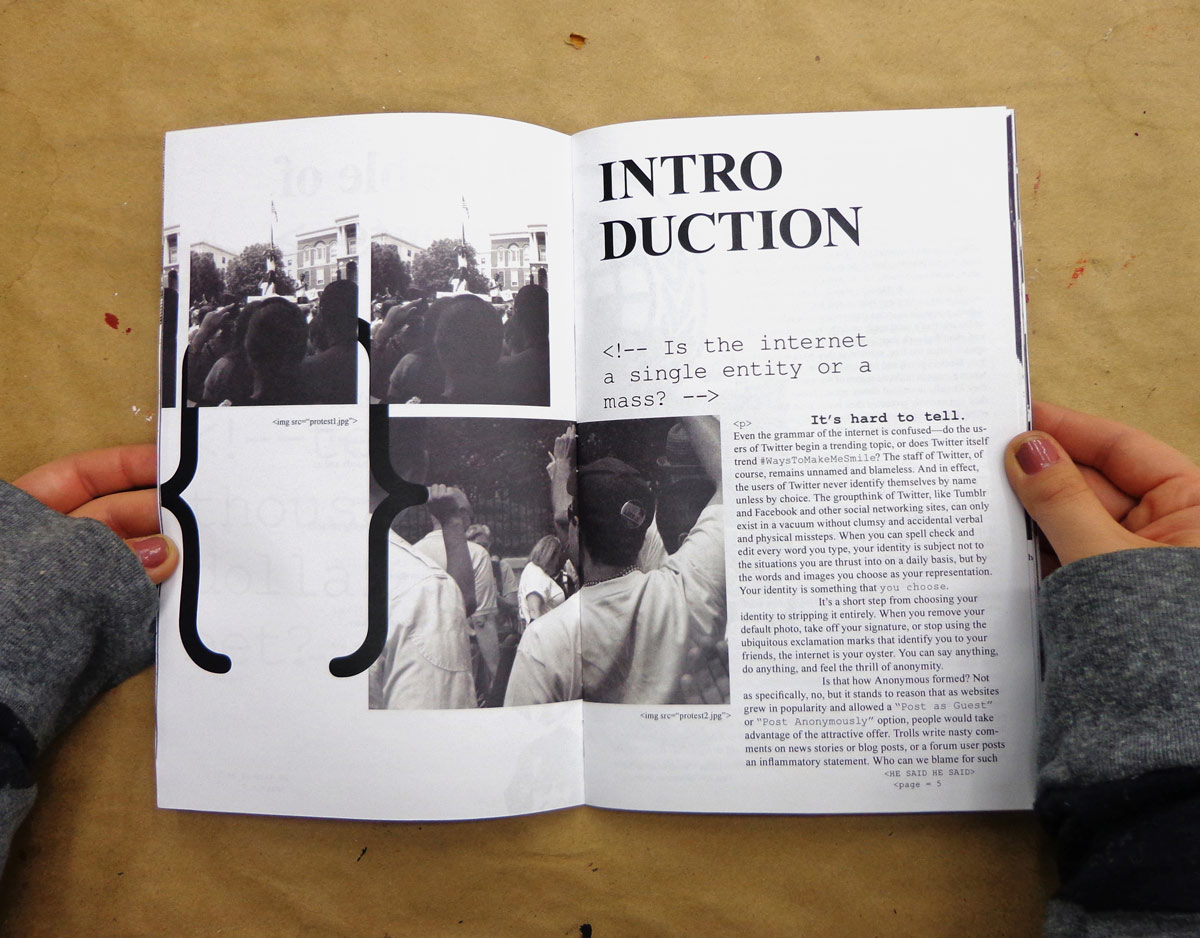 I was inspired by books such as We Are Anonymous to imagine a book that reacted to Operation Oracle, taking a more academic approach to the campaign. While a book would likely not use the visual approach of Oracle’s brand, in my universe it does (the benefits of imagination!). Details like image captions, running heads, and pull quotes in code build on Oracle’s distinctive look. 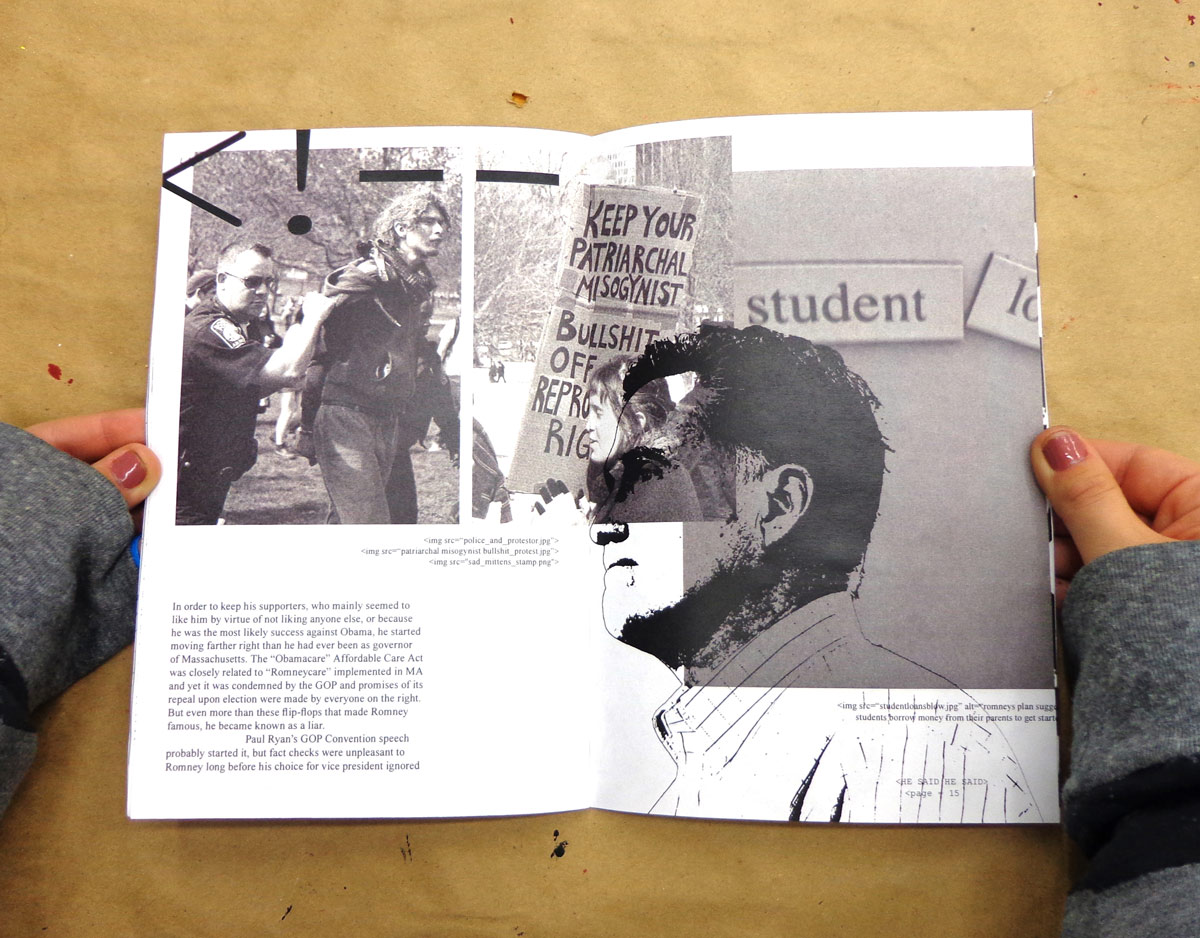 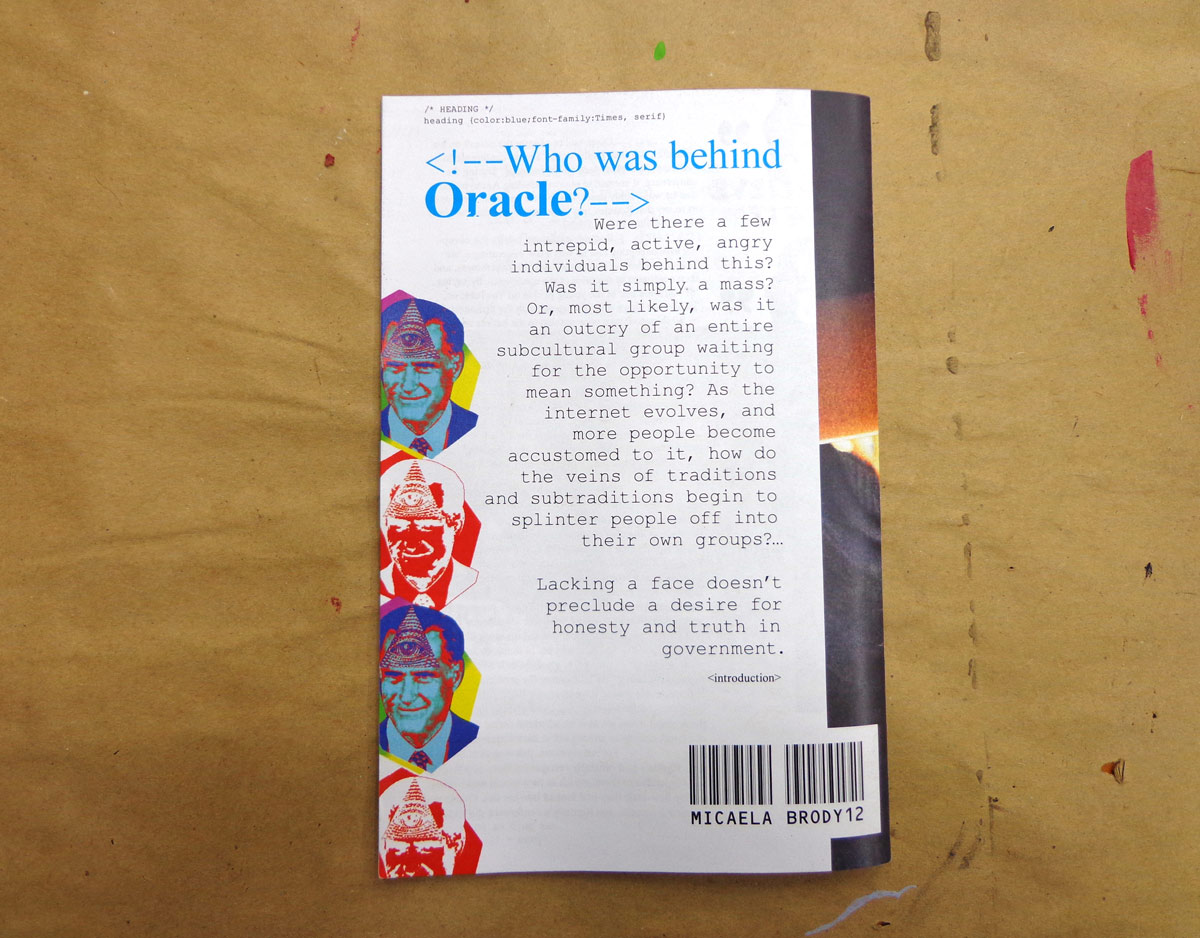 This is where most of my fictionalization came in - the product I created functioned as excerpts of a longer book, and I wrote a few chapters of Oracle’s story in this book, including plot points like Romney’s eventual response to the Operation and a fateful sound bite.