this project was my graduating senior thesis, 2013

Magazine racks screaming about weight loss and makeup tips line every drugstore and newsstand, but rumbling beneath every cover and every advertisement is one sinister sentiment for women: "You're wrong." Our bodies are wrong. Our habits are wrong. The food we eat, the friends we have, the brands we buy, the places we shop – all wrong.

"Special Advertising Section" looks at magazines and the culture they create from two angles simultaneously. First, the aggressive use of ornamentation and juvenile and tacky design to infantilize the reader and purposely distract from the text. Second, the deconstruction and dehumanization of women's bodies as found in fashion advertisements.

As a viewer experiences each piece of the campaign, they are drawn further into a weird, disconcerting world. It is a sort of uncanny valley - one might do a double take as they see something so familiar and yet so wrong.

"Special Advertising Section" is comprised of several small projects; tying them together is an extremely flexible identity comprised of two abbreviation marks, a full wordmark, and a set of body parts in halftone, reminiscent of the printed material from which they are culled.

The first engagement with the campaign are slipcovers designed to go over real magazines. Humorous and sarcastic in tone, they focus on the tacky and ornamented style of magazine covers and the true meaning of their flashy headlines. 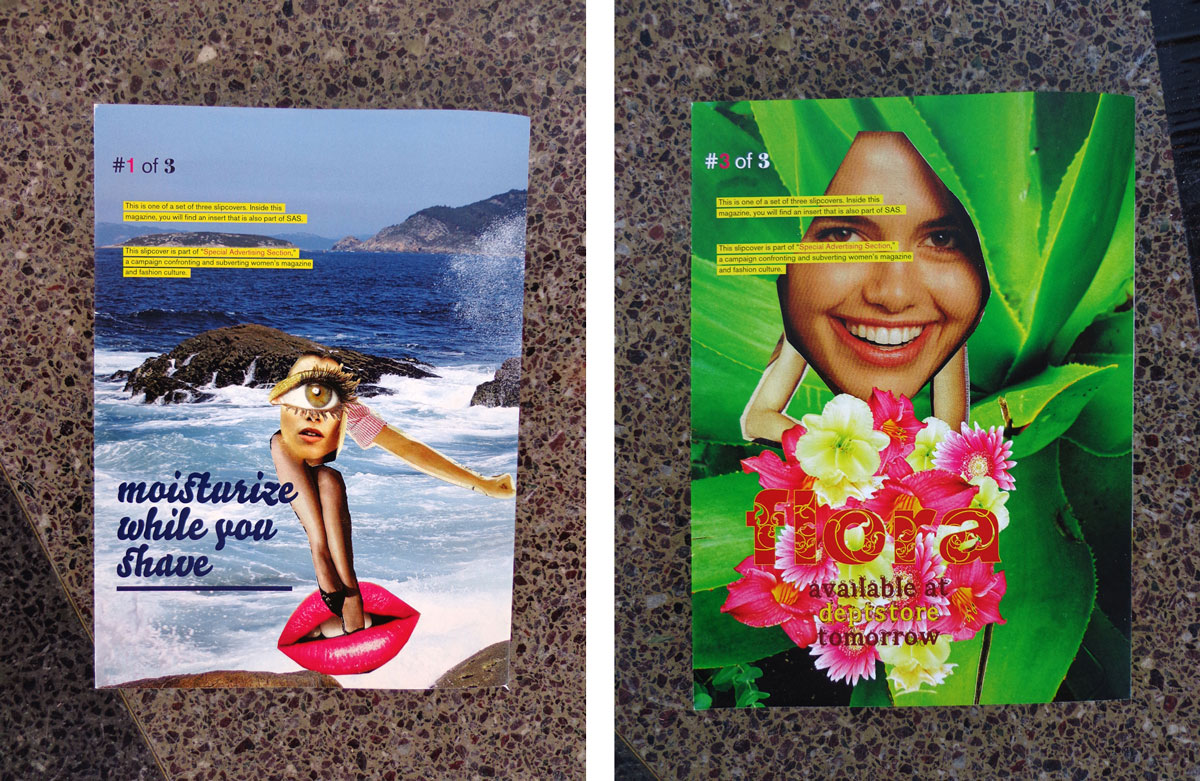 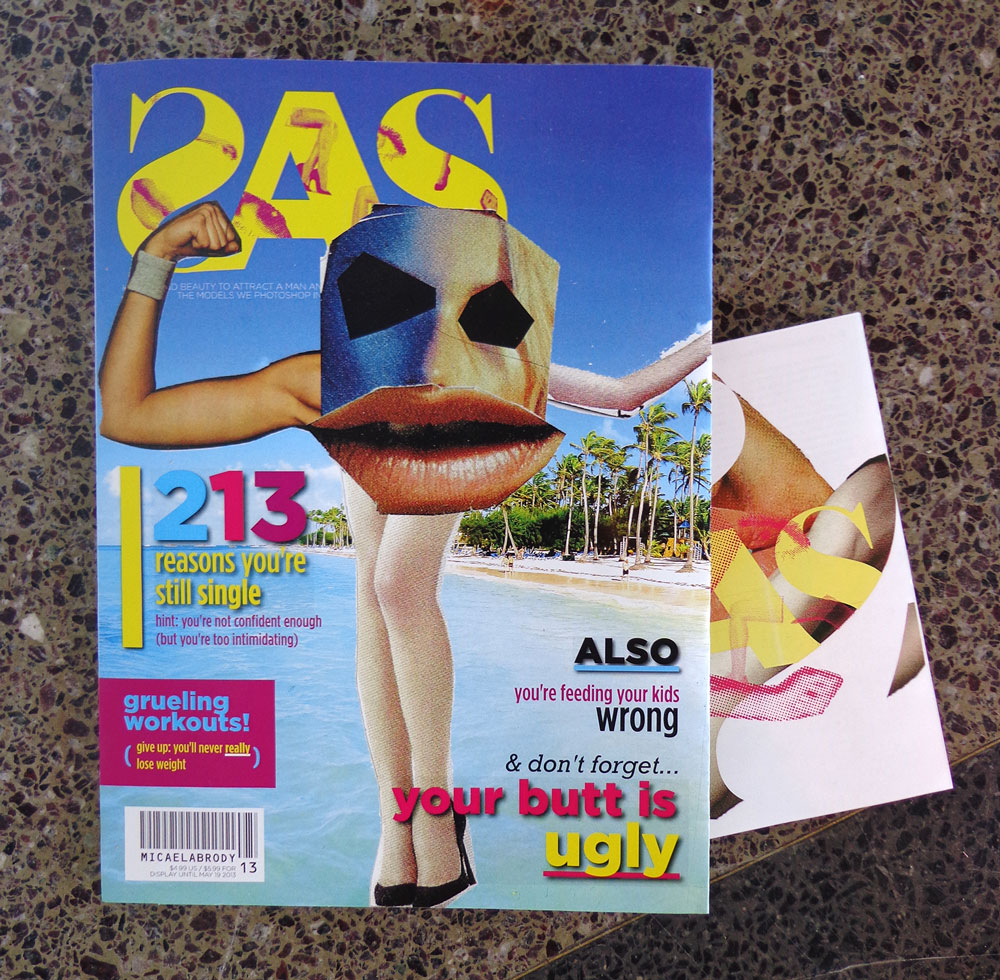 Drawing the viewer further into the distortion of magazines, the magazines marked by slipcovers contained accordion-folded inserts. These focus on how magazine interiors blur the lines of where advertisements begin or end. To do so they use ornamentation as a distraction from the content. While all 3 inserts use different design motifs, they are all connected by this theme.

The strange creatures made of disconnected body parts first made their appearance on the slipcovers. Here, they are featured in full force in the advertisements, emphasizing women's distortions of their own bodies in reaction to fashion magazines and industry body standards.

All of the inserts can be unfolded to reveal one-fifth of a poster for a final, dramatic example of disjointedness. The creature in the background - already a collage - is different for each variation, while the branding and text layer remains the same.

In this "finale," the viewer's experience has led them to not only see bodies chopped up in reaction to advertisements and media influence, but put it on display in a final, gruesome format. 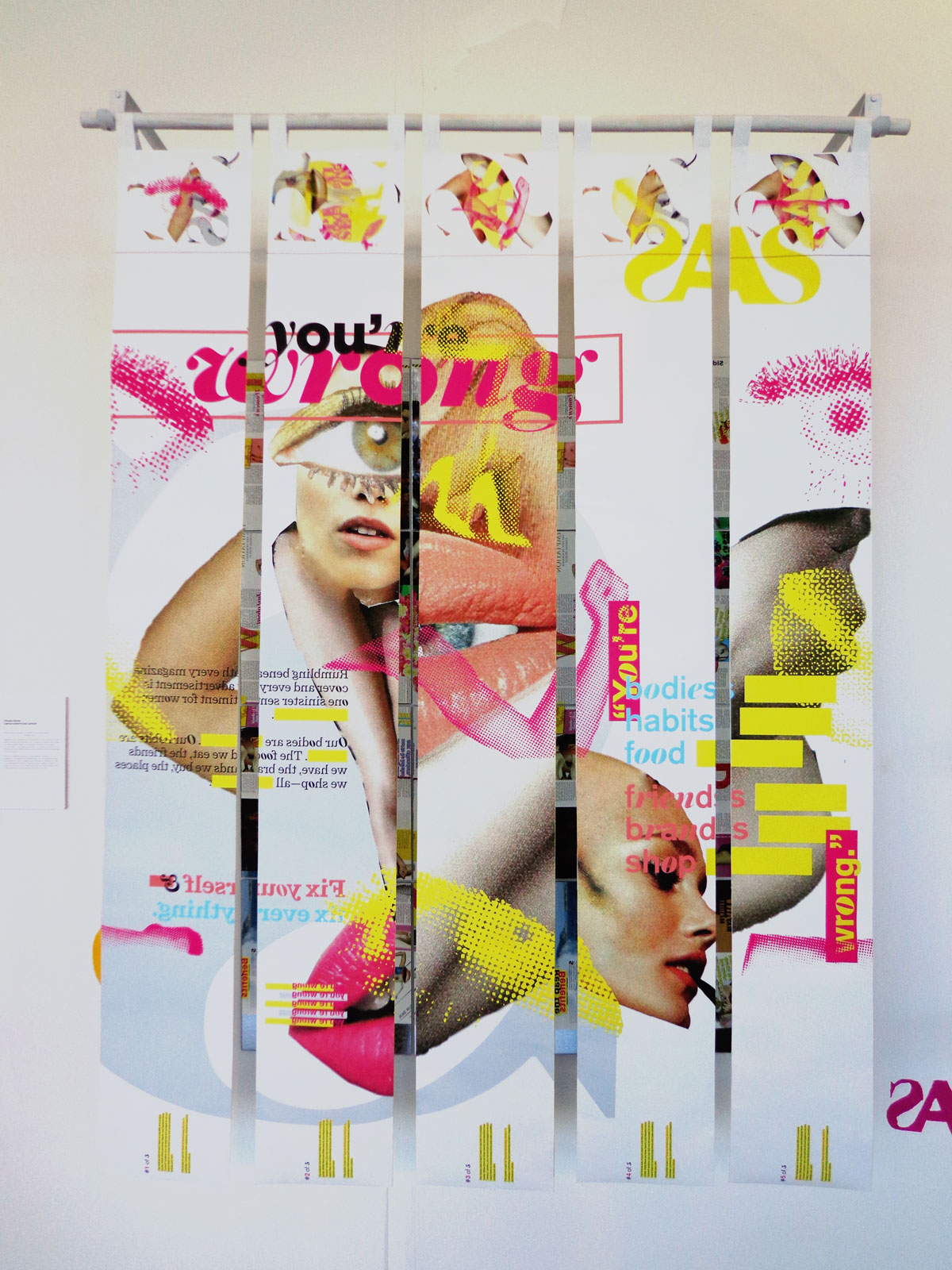 This project was on display from May 4-11, 2013 at the Boston University College of Fine Arts School of Visual Arts final thesis show.

Mirrors were placed behind the poster, to allow viewing of both sides of the poster/inserts. Viewers had to physically interact with the piece, by peeking through the strips or bending around the poster, which also invited closeness to the work itself. I also had miniature poster strips available for takeaway along with a parody subscription card.